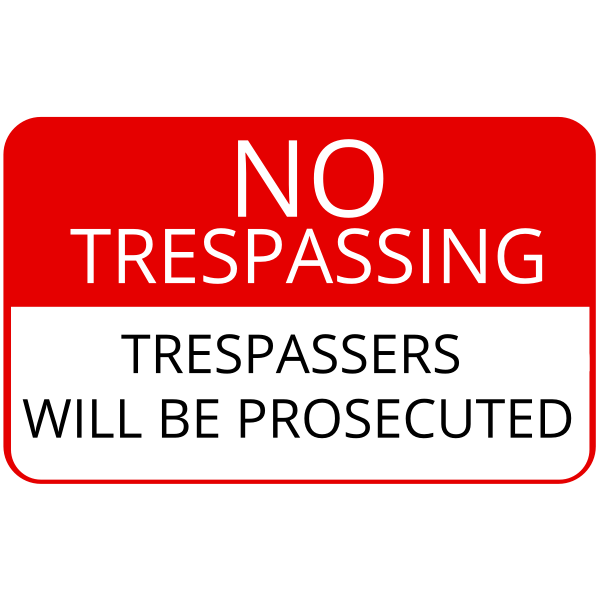 A charge of Trespassing in Fairfax County is considered a property crime that can range from a relatively minor incident to severe.  In some cases jail time is a possibility while in other cases the charge can be dismissed.  We strongly recommend that you hire an attorney for these cases because it is a Class 1 Misdemeanor that needs to be handled correctly.  We offer a Free Consultation to discuss your case and recommend giving us a call at 703-273-4100 or using the contact form below.

Trespassing is generally charged under either Virginia Code §18.2-119 or Fairfax County Code §5-4-1.  These code sections forbid going onto land for which such entry is forbidden.  Most of our cases involve clients going into parks or schools after dark for a peaceful hangout.  Every now and then we see cases where people go onto private property to demonstrate a cause and refuse to leave after being asked to.  In any case, Trespassing is a Class 1 Misdemeanor and carries up to 12 months in jail with a $2500 fine.  It should be noted that these penalties are only possible by statute but Judges rarely impose such lengthy sentences or fines.

Trespassing upon Church or School Property

Trespassing upon a church or school is defined in Virginia Code §18.2-128 as entering the premises of a school or church in the nighttime without the consent of an authorized person.  Most of what we see involve school property when current or former students of a school go onto the school property at night following a game or simply to hangout.  Such a violation is a Class 3 Misdemeanor and is punishable by a fine of up to $500.

Additionally, whether or not the person is a student of the school member of the church, they may not enter the property after being directed to leave by an authorized person or by any posted notice that can reasonably be seen.  Such a violation is a Class 1 Misdemeanor and carries up to 12 months in jail with a $2500 fine.  We have not seen too many of these cases since most people do leave when asked to.

There are multiple defenses to Trespassing cases.  Most defenses involve a lack of notice that forbade the person from being on the property.  For example, going onto the land of another under a bona fide claim of right is not trespassing.  A good faith belief that one has the right to be on the premises negates criminal intent and notice.

For parks and schools, was there a sign and, if so, was it reasonably visible?  If an individual entered an area that is forbidden but the sign is not posted in that area, they lack the criminal intent to commit a trespass and are not guilty.

If an individual was verbally told to leave an area by an authorized person, was that person authorized to say that?  In addition, the Prosecutor must get them into Court to convince a Judge or it is hearsay and the statement cannot introduced in trial.

If the person has never had a felony conviction and is currently charged with Trespassing, they are eligible to have the case continued for a period of time, be put on probation with certain terms and conditions (e.g. community service and good behavior), and have the charge later dismissed.  See §19.2-303.2.  This dismissal will ensure the person does not have a criminal conviction.

In many cases, we can negotiate a plea deal with the Prosecutor to have the charge dismissed after completion of community service.  This is the best resolution because the charge can later be expunged off the record.

Hiring a Lawyer for your Trespassing Charge

Due to Trespassing being a Misdemeanor, individuals should be represented by a lawyer.  Don't leave it to the discretion of the Judge.  Remember, the police officer will be in Court and may also have witnesses with them for your case.  You want someone in your corner with the expertise to handle these cases since you will be facing the possibility of a conviction and, perhaps, jail time.  We take the position that your case is our case and we too want a great outcome.