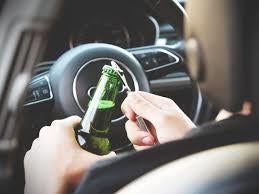 Drinking While Driving Is a Crime Even if Not Drunk

Driving with an open beer may seem minor but is a Misdemeanor in Virginia.  The Virginia Legislature has come down so hard on drunk driving in the past twenty years that even an open container of alcohol has been labeled a Misdemeanor offense.  The good news is the penalties are not nearly as severe as with other types of alcohol-related offenses.  However, because it is still a crime, the proper steps must be taken to avoid a conviction.  We have handled many of these cases and can help you put together a plan to work towards a successful outcome.  Give us a call or use the contact form below and we would happy to talk to you.

Virginia Code §18.2-323.1 makes it a Class 4 Misdemeanor to drive a vehicle while consuming alcohol.  In addition, there is a rebuttable presumption that a person is guilty of this offense if there is an open container within the passenger area of the vehicle, some of the alcohol is missing from the container, and there is the appearance that the person has consumed the beverage.

The statute goes on to define an open container as anything that contains alcohol and excludes the originally sealed manufacturer's container.  It also defines what constitutes the passenger area as the driver's seat, any area within reach of the driver, an unlocked glove compartment, and passenger seats.  Passenger area does not include the trunk, the area of the last upright seat (basically the tailgate area of an SUV or van), or even the passenger area of a vehicle designed for transporting people such as a taxi, bus, or limousine while engaged in the transportation of such people.

Preparing for your Open Container Case:  Guilty or Not Guilty

It is important to note that case law has held that even if the person appears to have consumed alcohol and is not charged with a DUI, they can still be charged and convicted of open container.  In cases where the person seems like they've consumed a fair amount of alcohol but the officer "throws them a bone" and only charges open container, we may simply recommend they plead guilty to the offense (so you avoid the prosecutor deciding to bring a DUI charge instead).

However, in cases where the person is drinking one drink and is not intoxicated, we can and will fight these charges.  We may have our clients perform community service prior to court in an effort to reach an agreement with the prosecutor to dismiss the charge.  In the alternative, we may simply put the case before a Judge and have a trial.  The one thing the statute does not mention but is clear is that you must know the alcohol is there.  For example, we have had clients where friends left an open container in the backseat somewhere and the client advised the arresting officer they did not know the alcohol was in their vehicle.  This issue of "knowledge" is ripe for trial.

We offer a Free Consultation to discuss your case.  We will be candid with you and let you know whether it's worth hiring an attorney.  Just because you're not facing jail time doesn't mean you should simply plead guilty because many cases have a viable defense.